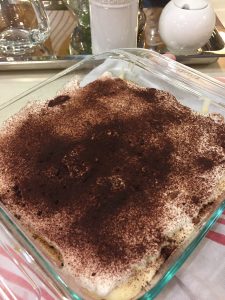 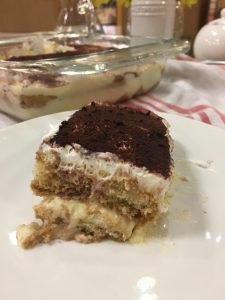 Since it is so close to Thanksgiving, this is the perfect recipe to bring to the holiday dinner. Thanksgiving is one holiday where we all want to bring something to share. It’s also when hosts rarely take on the responsibility to cook the entire meal on their own.

It’s easier to bring a dish to share than to host and cook everything on your own. Unless you’re me. In my case, I make turkey, mashed potatoes, gravy, green beans, stuffing and a dessert all on my own. I am not crazy, I just like it that way. But most of the population that’s sane and has a bit of sense offers to host and cook turkey while asking guests to bring the extras.

If you find yourself being invited to Thanksgiving dinner I recommend bringing this Tiramisu. It comes together in no time and best of all it’s better as it sits so you can make this on Wednesday and enjoy your way through Thursday.

I was clever enough to not attempt chocolate ladyfingers or call it that. I am just calling this Tiramisu, my original version. The key to the recipe is using fresh eggs, using strong espresso and allowing the dessert to sit in the fridge for 12 hours, minimum, before serving. That’s it. Seems simple but I’ve had plenty of average tiramisu where the pitfalls could’ve been avoided.

Note, most Americanized versions of the recipe call for incorporating whipped cream to the mascarpone mixture, unnecessary. Many Italians, where Tiramisu originated, don’t even like whipped cream on top as we do here in America. The whipped topping is at your discretion. I’ve served it both ways and guests enjoyed each.  Also, Marsala is the traditional alcohol of choice but I don’t like it. I’ve tried it with various alcohol flavors and opted for Amaretto as my liqueur of choice. If you use rum, baileys or something else I can’t promise you the Tiramisu will be amazing. Just putting it out there. Buy Amaretto and add it to this and drink it with your coffee, you can thank me later. You’re welcome.

In a glass bowl, beat the 3 egg yolks with sugar until thoroughly incorporated. When the mixture is pale yellow, it’s ready. Whip in mascarpone until just combined. If clumps form, continue to mix with a whisk.

In another bowl, beat 2 egg whites with hand mixer until stiff peaks form.

Fold egg whites into the egg yolk and mascarpone mixture. It takes a little work and being very gentle but folding egg whites in with a spatula is key to light and fluffy mixture.

In another clean bowl combine the strong espresso with Amaretto.

Dipping both sides of each ladyfinger into the coffee mixture, line bottom of an 8 x 8 square pan with dipped ladyfingers. Dip one ladyfinger at a time to layer the pan. Spread 1/2 mascarpone filling on top of ladyfingers. Repeat with second layer.

After the last layer of mascarpone, cover the pan with plastic wrap and refrigerate. The dessert should sit in the fridge for 12 hours minimum and up to 24 hours.

In another clean glass bowl beat heavy cream with a hand mixer until it holds stiff peaks.

After the initial 12 hour rest, top the tiramisu with whipped cream over the mascarpone mixture. Cover and chill for another 2-3 hours and up to 24 hours.

The tiramisu can be refrigerated for 36 hours total, if you can wait that long.

Remove the tiramisu from the fridge and let it stand at room temperature for 30 minutes. Dust with cocoa powder before serving.

This site uses Akismet to reduce spam. Learn how your comment data is processed.

© 2009- 2018 Green Eats LLC | Atlanta, Georgia | 857-ATL-EATS | info@localgreeneats.com All photos, designs, layouts, and content on this website, including blog posts are under copyright, unless otherwise noted. If you would like to borrow an image and/or content, kindly request for permission.