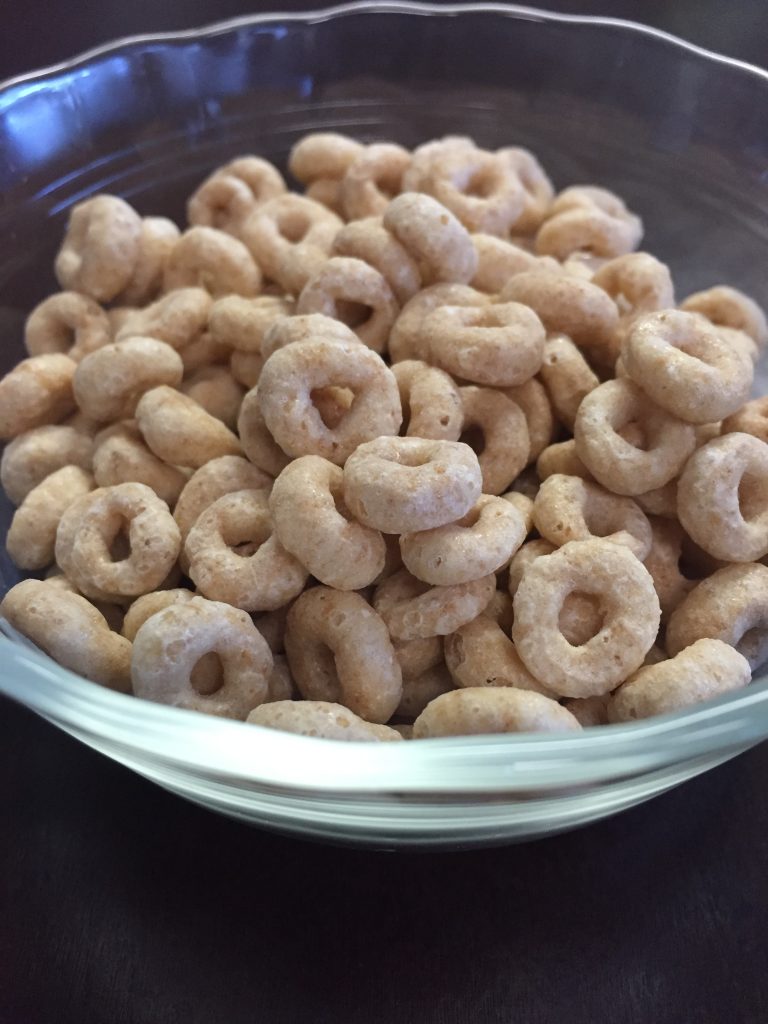 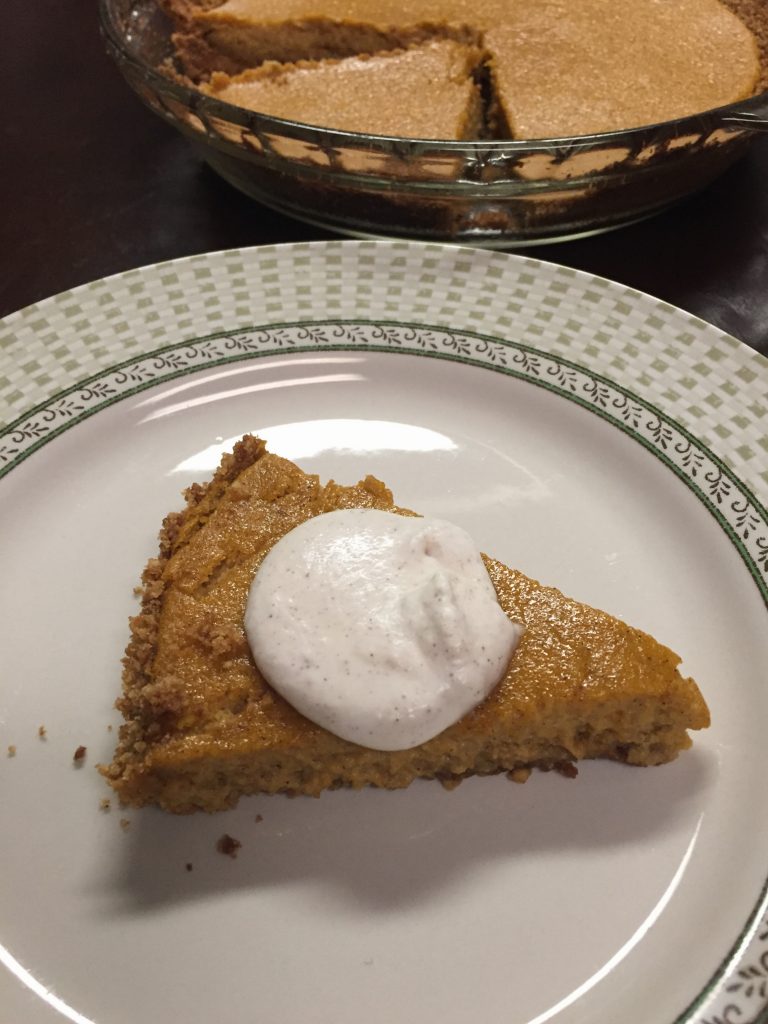 I love getting together for a feast so Thanksgiving this year was no exception.  We planned our trip months in advance.  Later an extended family member decided their family would join us at my parents’ home for the weekend of feast.  The menu was set- roast turkey, mashed potatoes and green bean casserole and a request to make gluten free dessert.  Pumpkin pie is the queen of desserts for the holiday season so I was excited to be tasked with making a gluten free version of this classic dish.

Making alternates for a classic recipe or using up leftovers in unique ways are two things that make what I do for a living so much fun.

After pursuing the internet for the best versions, I decided to test one recipe before Turkey Day.  Gluten free cheerios cereal won me over. The crust was simple and included melted butter, 1 tablespoon brown sugar and crushed cheerios.  The pie filling remains the same, as before: pumpkin puree, sugar, cinnamon, heavy cream, egg and salt.  After tasting it, I decided the brown sugar in the crust made this too sweet. Therefore, I omitted brown sugar in the crust on the second version.

I crushed the cheerios in the bag they were in to create the smooth crust.  Then I blended them in a food processor. Once blended, I combined the cheerios with the melted butter in a mixing bowl and thoroughly mixed the two.  If the crust seems dry, keep mixing until it resembles wet sand.  The advantage of gluten free crust is you can’t ever overwork the dough, a problem I often experience when making a gluten-laden pie crust.

It was nice to get the help from children in making dinner and especially the dessert.  I love it when kids get involved in the kitchen because they devour the food knowing they contributed. When the pie was served to everyone, there were couple slices left.  When I returned for seconds, the pie was gone, wolfed down by the kids, of course.  They took it upon themselves to have a 2nd serving.  And the best part?  The verdict of a gluten free crust, “this isn’t just good, it’s amazing!” I’ll take compliments from anyone but especially kids, often the toughest critics.

In a large mixing bowl, combine all the ingredients for the filling with a whisk or beater.  Make sure everything is thoroughly mixed.  Cover the bowl with plastic wrap and store in the fridge while baking the crust. Filling must be made ahead of time to allow time to chill in the fridge.

In a food processor, blend the cheerios until it resembles a coarse powder; finely blended works as well.  This is personal preference; I knew my family would prefer a finer grain for the crust than a coarse grain so I blended it until it was smooth.

In a mixing bowl, combine the crushed cheerios with melted butter using a spatula. Make sure most of the cheerios are combined with the butter to resemble wet sand.  If after all the mixing it still seems dry, add 1 teaspoon of melted butter.

Press the crust into a 9-inch pie plate, making sure the crust is in one even layer and doesn’t exceed the middle line of the plate.  If the crust is too high, it’ll burn while the rest of the pie is baking.  When I made this pumpkin pie with the children, we had some moon surface bumps that I had to flatten.  Place the crust in the freezer for 10 minutes.

Place the frozen pie crust in the oven for 10 minutes to par-bake.

Once baked, remove from the oven and allow it to cool.  Cooling takes about 30- 45 minutes.  It is important to cool it completely before adding the filling.

When the crust is cool, add the filling and bake in the oven for 30 minutes.  When I first tried this recipe, I had to bake mine for 35 minutes.  Test for doneness after 30 minutes if the filling isn’t set bake for additional time.

Cool the pie for at least 30 minutes before serving.  Whipped cream is a great accompaniment but ice cream is spectacular.  I whipped the heavy cream with powdered sugar and cinnamon for a special touch.

Not only did this pie make our thanksgiving gluten free but our entire meal was gluten free; I used cornstarch for the mushroom gravy in the green bean casserole.

This site uses Akismet to reduce spam. Learn how your comment data is processed.

© 2009- 2018 Green Eats LLC | Atlanta, Georgia | 857-ATL-EATS | info@localgreeneats.com All photos, designs, layouts, and content on this website, including blog posts are under copyright, unless otherwise noted. If you would like to borrow an image and/or content, kindly request for permission.